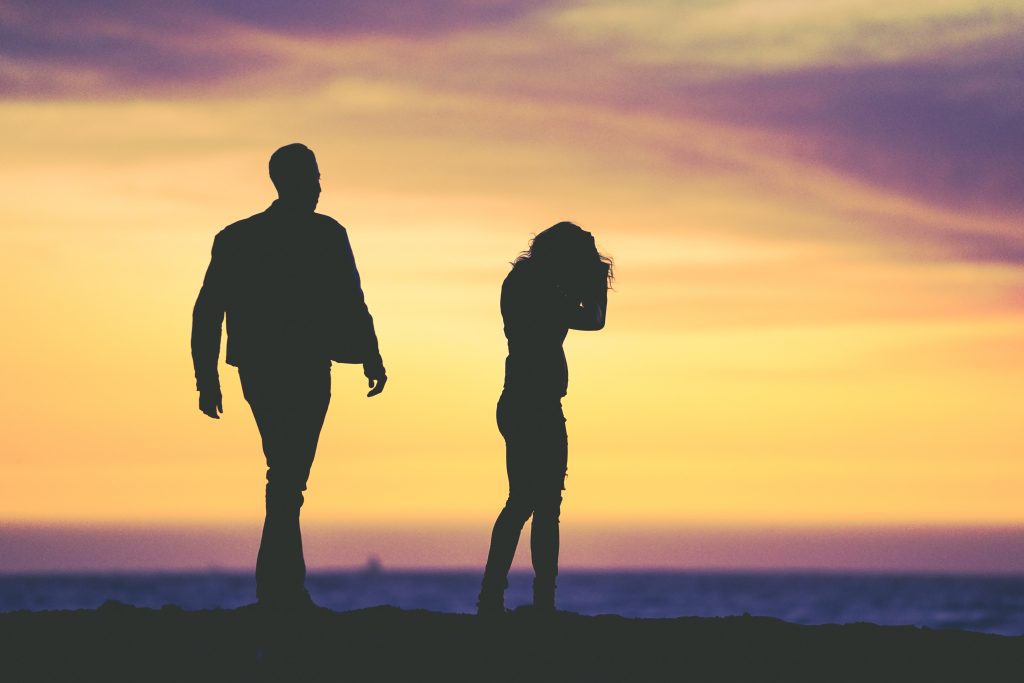 Abuse isn’t always hitting and bruises. Sometimes it’s emotional or mental, but abuse is abuse. It took me a very long time to come to terms with that because I didn’t feel like my abuse was as bad as what most people think abuse is. I wasn’t hit, so it wasn’t that bad, right? Wrong. It was still abuse. I was in an abusive relationship. There’s a big push to change ‘domestic violence’ to ‘domestic abuse’ so the term encompasses more things because there are other ways to be abused.

I did not know what abusive relationships without the violence looked like and therefore, I stayed in mine much longer than I should have. I simply didn’t know. Abusive partners also tend to exploit that fact and would reassure me that it was just me feeling like that and overreacting about things. I want you to know that you’re not overreacting and if your gut is telling you something, it’s usually right.

I want to share with you what I experienced that should’ve been signs that I was in an abusive relationship. Laid out here in a list, it seems pretty obvious, but abusive partners don’t do all these things at once. They’re on their best behavior at first and once they know you care about them and are invested, they’ll slowly start showing their true colors. Below are some things that abusive partners might do to you.

They put you down and mock things you like.

They claim they’re just joking and you’re being too sensitive. It’s constant, though. I was insulted and demeaned so many times by my ex. Or had to listen to him point our other girl’s physical features (“Look at her tits,” “I’d fuck her in the ass,” etc.) but I was just being too sensitive when I told him I didn’t want to hear it. It can be less obvious statements, too, like: “that’d look better if you lost some weight.” Constant, subtle digs to bring down your confidence is abusive behavior. A lack of compliments from your partner can also be lumped into this. They don’t want you to feel good about yourself and want you to constantly seek their approval.

You feel like you’re walking on eggshells around them.

That feeling like you have to watch what you say around them or even dress and act a certain way is their manipulation working. I never felt safe or valued or appreciated and it made me try harder to gain their approval. I was constantly trying to avoid upsetting him, sometimes knowingly and sometimes not. It took a while for me to pinpoint what that knot in my stomach and uneasy feeling was when we’d hang out. You should feel at ease around your partner.

You don’t tell your friends about things or leave out details because you know they’ll disapprove.

Or you straight up make excuses for them. I know after I finally accepted that I was abused and started telling my friends and family some particular instances, they were shocked. “You left that part out!” “Why didn’t you tell us that!?” Truthfully, deep down I knew my friends would disapprove and encourage me to leave the relationship, so instead, I omitted things so I wouldn’t have to hear it. At the time, I just thought that they wouldn’t understand my relationship or my ex and would judge too harshly.

They react volatile towards you when they’re angry.

It’s in sharp contrast to their usually calm and collected demeanor when they’ve had time to process and plan their reaction. When they get real angry, it can be scary. It can be explosive and cruel. I couldn’t wrap my mind around it, because if you care about someone why would you be that mean? It comes so far out of left field, you forget why you were even upset in the first place and just try to calm them down and make the anger stop. Your feelings no longer matter because you’d rather end the hostile reaction from them than get an apology.

They punish you when they’re upset or angry.

This could be the silent treatment, withholding physical affection, sex, money, and more. Instead of talking about and dealing with an issue, they will punish you so you don’t bring it up again. It’s not that they’ll change their behavior, they’re just hoping that you won’t bring it up again to avoid being punished by them once again. Was your grievance against them worth the punishment? They hope not.

Pushing you to do things sexually you don’t want to do.

They want to do it, so you should. Their ex did it, so you should. They wouldn’t have to sext other people or cheat on you if you’d just do what they wanted, so just do it. It could be something you’ve never done before or even a fetish you have no interest in participating in. They don’t care and since they want it, they will do everything to convince you to do it. Only an abusive partner would be this obsessed with pushing your boundaries and grooming you to do something you don’t want to.

They’re secretive about their life.

They make decisions without considering or telling you. You might find out they’re going on a trip for a week a few days before it happens. Or maybe they are weird about their phone, constantly angling it away from you or acting weird if you touch it. It doesn’t feel like you’re building a life together and in reality, you’re not. They’re going about their life exactly how they want to and you can accept it or move on.

A huge lack of interest in you and your life; merely focuses on what you can do for them.

You ask about their life, how that big project went, how their great aunt’s surgery went, etc. yet they never seem to inquire about your life. You figure they’re just busy and forgot to ask, so you fill them in any way. Over time, it becomes more and more noticeable that they don’t ask about your life or your accomplishments. This is not normal in relationships, but it is very normal in abusive ones.

They intentionally provoke you then act like your reaction is out of nowhere and that you’re the bad guy for reacting at all.

They’ll call you crazy, too sensitive, overreacting, or other names when you try to talk about something where they hurt you. This is called gaslighting. They’ll keep doing things to get a reaction out of you and then blame you when you finally react. You can only take so much and you will probably feel like you overreacted, but look at what got you to that point. Did you actually overreact or were you pushed to that point? Everyone has their limits and your partner should not be actively trying to push you past yours.

You find yourself explaining basic human empathy to them – about your life, someone else, their coworker, in movies, etc.

They often make fun of people going through hard times and being emotional over it. They aren’t emotional nor can they understand someone else’s sadness. I remember I had to explain to my ex why I was sad that my one and only grandpa died. To him, I was just annoying and clingy as I was grieving. Abusive partners often cannot put themselves in someone else’s shoes nor do they want to since they believe their shoes are better anyways.

They have a sense of entitlement.

They tend to think that they’re better than everyone and should be treated as such. The rules don’t apply to them and they’ll just do what they want anyway. It can come across as charming at first and can be confused with confidence. You’ll see that it’s very different, though, the longer you’re with them. They think they just deserve things and not that they have to earn it.

They are the important ones, not just in the relationship but in general.

Similar to the above point, but slightly different. They expect you to prioritize them and their schedule but complain or act like they’re doing this huge favor when they have to accommodate yours. Their needs come first. It feels like you’re just there for their needs and to serve a purpose – sex, attention, etc. rather than in an actual relationship. Unfortunately, that is usually the case.

They sabotage special occasions and times when you’re happy.

As soon as things seem too good to be true and like you’re doing well, they make sure to do something to bring you down or put the attention on them. Birthdays, Christmas, anniversaries, etc. will be constant disappointments. If you try to approach them about it, they’ll deflect and say they’re trying their best and that you obviously care too much about those ‘meaningless’ milestones.

These are by no means all the signs of an emotionally abusive relationship, but they are ones that I personally encountered and wanted to share. If you’re experiencing any of these or more, just know that you’re not crazy and you’re not alone. You can and will escape and recover. Please know that if you do speak up about it, there will be people on your abusive partner’s side that don’t believe you – because they’ve never abused them…. they’ve never seen them do anything it… they wouldn’t do that. This is normal but still frustrating, I know. But would your partner ever have the capacity to say out loud to themselves or others that yes, they are abusive? Highly unlikely, they are going to deny, deny, deny, and try to paint you as overreactive and crazy.

Please know that you’re not. You’re reacting normally to their crazy treatment of you. I’ve listed some resources and further reading below on emotional abuse. I highly encourage you to reach out to The Hotline or your Local Women’s Shelter for support. This is their job and they’re highly versed in this. It took a therapist, my primary care physician, a counselor, a lawyer, a cop, other abuse survivors, and a judge to reassure me what I went through was abuse. It’s normal to be in denial and not believe it at first.

Knowledge is power and reading about abuse and what it actually was helped me tremendously. I’ve also tried to be more open and vocal about what I went through (like with this post) because it’s not my fault and others probably don’t realize they’re going through abuse either. It does make me feel incredibly vulnerable, but I have had several people reach out to say it was helpful and that I opened their eyes to their own abuse. That is worth it right there in my eyes.